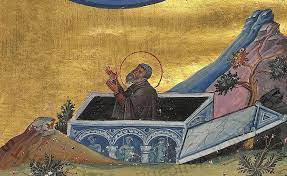 Pontiff St. James (Soorp Hagop) of Nisibis is one of the authoritative and beloved saints of the Universal Church. He has deserved the epithet “Thaumaturge” (Wonderworker) for the numerous miracles relating to his name. According to hagiographical sources St. James was from a Parthian dynasty and the nephew of St. Gregory the Illuminator. When the family members of Anak the Parthian were killed, nurses secretly fled to Caesaria taking with them baby Suren and James where they were educated in the Christian spirit. Soon baby James and his sister Sakden were taken to Persia and for a while lived in the royal palace. However, James withdrew from a safe and well todo life and became a hermit.

He left for Nisibis where he met hermit St. Maruge, who was famous for leading a life befitting saints. After the death of the Bishop of Nisibis, God appeared to Maruge and told him that St. James was the deserving candidate for the Bishop of  Nisibis.

James learnt from the hermit Maruge that many people, despite their conversion to true faith, were skeptical and suspicious about the existence of Noah’s Ark.

James decided to climb Mount Ararat in order to see the Ark and bring back a piece of it. He tried many times to climb Mount Ararat to find Noah’s Ark, which was buried under thick layers of ice, at Parrot Glacier, upon the top of the mountain. He would climb the mountain, fall asleep and wake up downhill from where he was. After repeated failed attempts, God appeared to him in a dream and said, “Do not try to find the Ark anymore. I will give you a piece of a wood of what the Ark was hewn”. When he woke up, to his amazement, he found the wood lying nearby. He decided to build the monastery at the location that he found the wood. St James passed away in 350AD after leading his flock for many years.

Saint Hagop monastery was founded in 341 A.D. It was built upon the northeastern slope of Mount Ararat (Masis) in the Masyatsotn canton of a larger province of Ararat in the Armenian kingdom. Some sources say that St. Hagop was the name of the monastery while there was a chapel of St. James nearby, while other sources refer to the two as the same site. The monastery is said to have contained relics of wood from the Biblical Ark of Noah. A strong earthquake occurred at Mount Ararat on July 2, 1840 causing an avalanche that destroyed the monastery of St. Hagop, Arakelots Vank in the neighboring village of Akori as well as the village itself. The piece of the Ark is currently kept in the museum of the Mother See of Holy Etchmiadzin.

Bishop St. Melitus was born in Melitene, Armenia Minor. In 358 he was the Bishop of Sebastia. In 360 he ascended the throne of Antioch. He struggled against the Arians. In 381 he presided the Second Ecumenical Council convened in Constantinople but unfortunately passed away before the end of the Council.