Commemoration of St Hripsime and her Companions 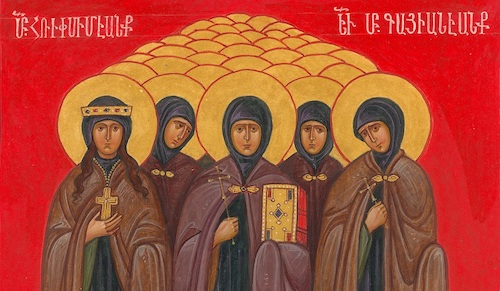 St Hripsime, along with her companions in martyrdom, are venerated as the first martyrs in Armenian history.

Noble Hripsime was one of the 37 Christian nuns who, together with the Abyss Gayane, lived during the period of the reign of the Roman King Diocletianus (284-305) in the Monastery of St Paul located in the mountains of Rome. The Holy sisters had dedicated their lives to Christ.

Hripsime’s beauty captivated the King who wished to get married to her. Disobeying the King, the pious nuns, led by their Abyss Gayane, ran away. According to oral traditions, a Holy Godmother appeared to them and told them to leave for the Araratian country; Armenia. So, the nuns went to Vagharshapat. On their way, they passed the Mountain of Varague (Varak). Here, Hripsime buried in the earth a relic from the wooden Holy Cross, which she always had on her neck. The relic was found by a miracle in the 7th century and since then, the Feast of the Holy Cross of Varague (Varak) has been celebrated in the Calendar of the Armenian Apostolic Church, along with the other feasts dedicated to the Holy Cross.

The Pagan Armenian King Tiridates III (Drtad/ Trdat), becoming aware of the nun’s beauty, also wished to get married to Hripsime. Accordingly, Hripsime was brought to the palace, with Gayane, in order to convince Hripsime to obey the King. However, Gayane told Hripsime to hold true to her faith and in his anger, Tiridates ordered that all the nuns be killed.

In this storm of destruction, King Tiridates became afflicted with strange maladies, and no physician or pagan priest could heal him. It was only St. Gregory, who the King had condemned to the pit in 287AD, that was able to restore Tiridates, through the power of prayer and faith.

The nuns’ martyrdom is a turning point in the history of the Armenian nation. After their martyrdom, St Gregory was released from the pit and was able to spread the light of Christ in Armenia.

Upon his delivery from the pit, in the early 4th century, St Gregory the Illuminator found the relics of the nuns and built chapels on those sites. Later, during the time of St Sahak Partev (Bartev), these chapels were rebuilt and then again, during the pontificate of Catholicos Gomidas (7th century), two beautiful cathedrals were erected. One of these, the Cathedral of St Hripsime, remains a monument of Armenian architecture.

His Holiness Vasken I wrote: “It is with deep emotion that we wish to inform you that the ancient tomb, discovered during the past year under the walls of the St. Hripsime monastery, has disclosed graves of interred bodies without heads. It is highly probable that those remains are those of some of the maidens.” Because of the indication of how the bodies had been severed, the direction in which they were buried, and the absence of pagan like burial practices, the archaeologists were able to confirm the authenticity of Hripsime and her followers’ relics at the site.

In the Armenian Apostolic Church, on the days of the feasts dedicated to the memory of St Hripsime and her companions, a Divine Liturgy is celebrated in all Armenian Churches. On the eve of the feast, ceremonies are held, which start after the evening service and Church hymns and songs, dedicated to the nuns, are sung.