Back to Diocese News 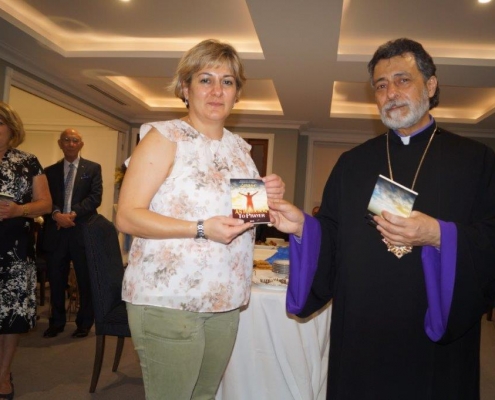 On Saturday 29 February 2020, a cocktail reception organised by the Prelacy was held in the Diocesan Centre in honour of His Eminence Archbishop Hovnan Derderian with representatives of Armenian organisations and key donors invited. Following the opening welcome by the Diocesan Council Chairman Mr Sarkis Der Bedrossian, Mr Michael Carapiet, Chairman of the Fundraising Committee, called on the invitees to donate as much as possible for the purpose of the Mother Cathedral. Archbishop Haigazoun Najarian followed by introducing Archbishop Derderian who outlined his positive impressions of the community over the past two day and presented a video on the Mother Cathedral renovation work. After answering the questions posed, the invitees had personal discussions with the Archbishop and expressed their support of the restoration project.  The cocktail, attended by about 90 Armenian faithful, enjoyed the delicacies prepared by the diligent Ladies Guild of the Diocesan Centre. Those present in the sanctity of their Diocesan home were able to consult not only on the issue of the Mother Cathedral but also on various subjects that touched the nation and the community. The event concluded at 10.30 p.m